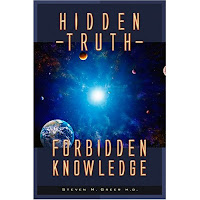 YOUNGSTOWN (TDB) -- At Youngstown State University, the school is offering a course that investigates the activities of undocumented aliens, the aliens who can't be kept away by building a fence along the border with Mexico. The YSU class raises the possibility -- perhaps the likelihood -- that humans and the Earth have repeatedly crossed paths with extraterrestrial visitors. Foremost among such encounters this year might be U.S. Rep. Dennis Kucinich's disclosure he had sighted a mystery craft -- the Cleveland Democrat who is running for president reports he spotted a UFO years ago.

The YSU class is a special topics psychology course called "ETs and UFOs," and uses Steven Greer's book Hidden Truth:Forbidden Knowledge as its text. Greer is a physician who contends the government has covered up contacts with extraterrestrials and is calling for the United States to make public what it really knows. He claims to have inside information from top CIA spies on down the line.

Sarah Sole, news editor of YSU's student newspaper, The Jambar, says the class taught by retired psych prof Steve Graf is a curriculum pretty much unique in the nation. Only Temple University in Philadelphia offers a similar class. Sole said the course is intended to push students to think about separating myth from reality -- with the reality being that UFOs might actually be out there after all.

From The Jambar:
"A discrepancy exists between the reality of extraterrestrials and what the media perpetuates about them, Graf said. While moves like 'War of the Worlds' and 'Independence Day' depict extraterrestrials as brutal monsters, reality points to peaceful visitors that do not aim to abduct earthlings or steal resources. Graf said he admits that the class was be challenged by skepticism. The climate of false thinking that surrounds the subject of UFOs often prevents educated individuals from becoming involved, Graf said. They don't want their credibility to be questioned."
And:

"Quarantines are placed on societies or planets like ours that haven't fully developed socially. As a society, we are not mature enough to deal with extraterrestrials, Graf said. 'They're sort of waiting for us to get it,' Graf said."
Posted by Unknown at 11/18/2007