Ohio Judge Uncovers Another Clunker: 57 Years Of Schooling To Comprehend This Sentence 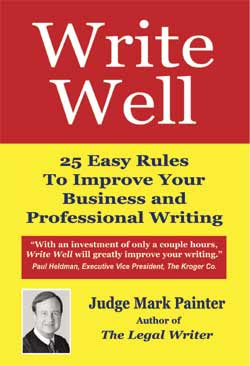 CINCINNATI (TDB) -- Ohio Court of Appeals Judge Mark Painter is constantly on the case of bad writing. "The fight goes on," could be his motto. The Cincinnati judge favors sentences -- the prose kind -- that don't exceed 40 words. This month, he's encountered a bewildering 135-word behemoth that tests out at a readability level far beyond high school, college, or post-grad levels. Painter disclosed he "extracted the gem" from a federal legal brief, and reports in the current edition of the Cincinnati Bar Association magazine:

"The passage tests at the 57th grade, meaning that to understand it the first time you must have completed 57 years of formal schooling. Do you know anyone who has been to the 57th grade? The readability score -- on a 100-point scale -- is 0."

So what did he find. Here goes:

"Should the Court determine that a hearing is necessary, the Government requests leave to supplement its' (sic) filing with a factual chronology of the defendant's own admissions of guilt with the Federal Bureau of Investigation, the defendant's uncorroborated allegations of wrongdoing by others, the defendant's attempts to dissuade the government through prosecuting him through a series of threats relayed by him and others on his behalf about the damaging fallout that a prosecution against him would incur and the steps taken by the U.S. Attorney's Office to insure that if and when such a motion was filed as the one pending, we would be able to pinpoint with certainty the steps taken to insure an independent analysis of any legal relevance [Defendant's] allegations had to this or any other prosecution undertaken by this office."

Painter has published two books chockful of splendid advice about how to write with clarity. It's been said that lawyers (and journalists, too, for that matter) should face malpractice claims for ignoring his advice. The Daily Bellwether has copies of both his books -- and consults them frequently. Anyone who works with words ought to own them.
Posted by Unknown at 6/06/2008