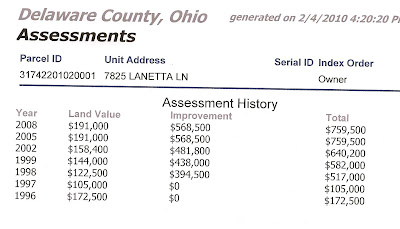 CINCINNATI (TDB) -- John Kasich acquired 10 acres of land in one of Ohio's fastest growing counties in April 1996 for less than courthouse property tax records show the land was worth. Delaware County appraised the property at an average of $17,250 per acre, but after Kasich bought it the land value dropped to $10,500 per acre. In other words, the tax value of the 10 acres fell from $172,500 to $105,000. Kasich's tract is next to a private country club outside Westerville in Central Ohio, and he built a 4,387-square foot home on the site. At the time, Republican Kasich was one of the nation's most influential congresssmen as chairman of the House Budget Committee. The Delaware County purchase allowed him to build on a secluded homesite in an exclusive area. Kasich's compound -- including the land and home -- is currently valued at $759,500 on county tax records. Kasich quit Congress after a failed presidential campaign in 2000. He became a FOX News commentator and worked at Wall Street investment bank Lehman Bros., as a managing director until the firm's collapse.

Kasich's property tax records are available online at the Delware County Auditor's Office. The Daily Bellwether looked them up earlier this week. Other records in the courthouse seem to indicate that Kasich purchased the property out of an estate. The estate may have been controlled or administered by a campaign aide or partner. That suggests the land transaction may not have been an arm's length deal. Or it may be that Kasich heard about a good buy on the real estate market and pounced. Either way, there is a possibility of insider trading. At some point in the campaign against Democratic Gov. Ted Strickland, Kasich may have to answer questions about his real estate dealing in Delaware County.

The county property tax records show that several years passed before Kasich's 10-acre tract of land was reappraised in excess of its 1996 valuation.
Posted by Unknown at 2/04/2010