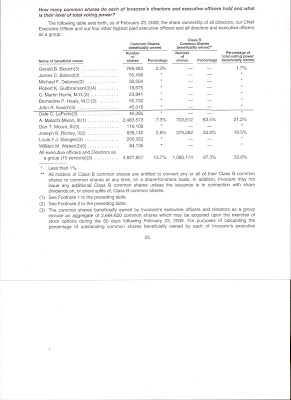 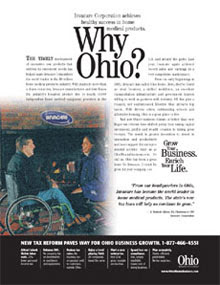 CINCINNATI (TDB) -- John Kasich, the Republican candidate for governor of Ohio, serves on Invacare Corporation's board of directors and owns 45,000 shares of stock in the Elyria-based medical products manufacturer. (See the April 2009 proxy statement above.) Kasich's company -- which has made him rich -- loves the state. And while Kasich is campaigning on a theme that Ohio's tax climate is miserable for business growth and entrepreneurs, Invacare is taking part in a national advertising campaign that says "Ohio's business climate is better than ever." While Kasich claims Gov. Ted Strickland's administration has been chasing jobs out of the state, Kasich's company sees Oho as "an ideal location." Indeed Invacare's (IVC:NYSE) version of Ohio is poles apart from Kasich:
"From its early beginnings in 1885, Invacare has called Oho home. Here, they've found an ideal location, a skilled workforce, an excellent transportation infrastructure and government leaders will to work as partners with industry . . . And now Ohio business climate is better than ever. Major tax reforms have shifted policy from taxing capital investment , profits and wealth creation to taxing gross receipts. The result is greater incentives to invest in innovation and productivity and more support for entrepreneurial activity."
All that is from an advertisement that goes on to quote A. Malachai Mixon III, Invacare's Chairman and CEO, as saying Ohio has been a great location for his company: "From our headquarters in Ohio, Invacare has become a world leader in home medical products. The state's new tax laws will help us continue to grow."
Kasich has been on Invacare's board of directors since 2001. The latest proxy statement shows him with 45,018 shares. Just after noon today, those shares were worth $26.46 each -- or $1,1919,762. Kasich seems to have done well financially in a state whose tax and business climate he is ripping on the campaign trail. His Invacare holdings have made him wealthy. You can find the a link to the Invacare ad here and a brochure(pdf) that lists Invacare among several corporations that are effusive about their Ohio business locations.
Posted by Unknown at 2/08/2010